From Bath to Broadbeach

Arwel Jones, previous owner and majority shareholder of Broadbeach Waters Pharmacy on the Gold Coast, Queensland, is an avid soccer fan. I guess if you’re born in the UK, that is kind of a given. Born in, Pontypridd, Wales, he started playing soccer at 8 of age and, after completing school, moved to Bath to do his Bachelor of Pharmacy at the University of Bath. For the first year he lived on campus and then moved to a share flat with three friends above a pizza shop, where he lived for two years. Which begged the question…….. did the wafting smell of pizza every day for two years turn him off the famous Italian dish for life? Apparently not. The shop, he said, was owned by an elderly Italian couple and the pizzas were apparently delicious. Should have asked him if pizza may have been his staple diet back then but thought I’d leave it alone.

He graduated in 1996 and started work for one of the UK’s leading pharmacy brands, Boots, where he remained for a few years. He then took on the role of Pharmacy Manager for Sainsbury’s in Bath.

He always had a hankering to go to Australia and around 2008, applied for and got a job with the Friendly’s Pharmacy in Bundaberg. From Bath to Bundaberg, well, it was a bit of a culture shock. But he loved the laidback way of life. And, of course, he joined a local soccer club, the Bundaberg Brothers Aston Villa soccer team where he got Player Of The Season while there.

He remained in Bundaberg for a year and a half and at the end of 2009 moved to Brisbane where he took up a position as a Business Development Manager for  MediSecure, an accredited electronic prescription exchange service.  Arwel always had an ambition to own his own business and says he gleaned some valuable business experience while there. In 2010 he went back to his roots and started locuming around South East Queensland, gathering more experience on doing business in Australia.

In 2011, he decided to bite the bullet and buy his first pharmacy in Broadbeach Waters on the Gold Coast, then owned by Warwick Hobart, who later became a client of mine. Warwick had owned a pharmacy in Sydney’s CBD before relocating to the Gold Coast. I didn’t know Warwick at the time, but met him in 2012 when he engaged me to sell another pharmacy he owned, Queen Street Discount Pharmacy in Brisbane City. While the pharmacy was spared any damage during the devastating floods of 2010/2011 that hit Brisbane pretty badly, foot traffic dramatically dropped away while the cleanup and road and building repairs were underway. This was made worse in 2012 when Queensland had a change in government, with the incoming government slashing public service jobs in the city, further exacerbating tight trading conditions. By this time, Warwick decided enough was enough, and it was time to retire. I went on to sell the pharmacy, and we have kept in regular touch, catching up for coffee a couple of times a year until COVID hit. I spoke to him recently. He is well into his eighties now and still kicking along.

In 2014 Arwel relocated the pharmacy to its current position on Monaco Street, in a small strip of shops, adjacent to a small medical centre. The pharmacy business continued to grow at a steady pace and in 2018 he sold a small share of the business to a working partner.

Broadbeach Waters Pharmacy was one of the first pharmacies to dispense medicinal cannabis on the Gold Coast after it was legalised by the Australian Federal Government in 2016.  Within a year, turnover had more than doubled. 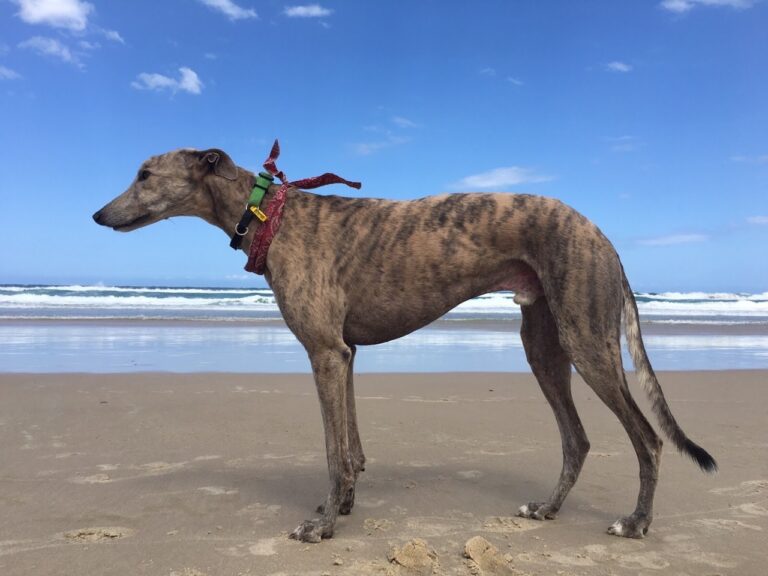 Arwel, like me, is a bit of an animal lover. When he lived in the UK one of his friends had a rescue greyhound as a pet. He was so taken by the gentle nature of these beautiful but sometimes exploited animals that it led him to becoming involved in rescue greyhounds on the Gold Coast through the AWL (Animal Welfare League). In 2013, he fostered Henry, a 3 year old greyhound (pictured). The two spent many a happy hour together all around the coast. Henry loved the beach. Arwel even created an Instagram page for rescue greyhounds called @thegreysofourlives (The Greys Of Our Lives. A little play on words there Arwel?) Henry spent 5 happy years with Arwel before sadly passing away in 2018.  Arwel still fosters greyhounds, but only on a casual basis. He found it too emotionally draining after losing Henry to consider fostering full-time.

Arwel decided in 2021 that 10 years of pharmacy ownership was enough. He wanted to take a break and wanted to travel. I was engaged to sell the pharmacy and in July 2022, his business partner took full ownership of the pharmacy.

Soon after settlement, Arwel travelled to the UK to visit the family in Pontypridd, where he spent a couple of months. He recently returned to Australia and is now looking forward to the next phase in his life.